Help! I fell at work and was injured. Now what?

A slip and fall can happen in a millisecond, catching you completely off-guard. It can also happen to anyone, not just older adults.

It’s tempting to just laugh off a slip and fall at work. You might be embarrassed to admit that you fell or think that it was somehow your fault. You might think it was no big deal…

Until you wake up the next day and can’t get out of bed.

First, you should know that slip and fall accidents are surprisingly common. According to the Bureau of Labor Statistics (BLS), they made up 27 percent of all work injuries in 2015.

Many slip and falls result in minor injuries like sprains, cuts and bruises, but some can involve much more serious bodily harm. Whether your injuries are minor or serious, you deserve compensation for your medical expenses and time off work.

Under Georgia workers’ compensation statutes, all work-related accidents, injuries and illnesses are covered — including slips, trips and falls. This means that 100% of your medical bills and lost wages should be paid for by your employer. However, if your workers’ comp claim is denied for some reason or you wish to file a lawsuit against a third-party, your claim will get much more complex. In such circumstances, it’s important you understand your rights.

If you or a loved one recently fell at work and were injured, we can help you navigate the workers’ compensation process. At Gerber & Holder Workers’ Compensation Attorneys, our experienced Atlanta work injury attorneys will fight to get you the full compensation you deserve.

Don’t take your employer at their word if they say your workplace slip and fall isn’t covered.

Legal Service  |  Georgia
Overall Rating: 5 / 5
“Once we decided to proceed with litigation, Mr. Holder was able to get workers compensation coverage including reimbursement of medical expenses, loss wages, as well as compensation for lost wages… Mr. Holder was helpful, professional, and efficient.”
Janet
Legal
“Tom Holder represented me in my case and I was very pleased with the outcome of my case, him and his staff were very easy to talk to and did an excellent job of keeping me aware of what was going on throughout the entire case, I am a very satisfied individual in the outcome of my case, I was very blessed to have a lawyer that was there for me if I had any questions, if I ever was to need a lawyer, I would consult him first.”
DeWayne
Legal
“I would absolutely recommend Tom Holder if you are looking for a Worker’s Comp Lawyer in Atlanta. He was amazing throughout the entire process. He was not only concerned with the outcome of the case but also my well-being throughout my recovery.”
Peggy

Common Causes of Slip and Fall Accidents at Work

Many times, the causes for slip and falls in the workplace are pure accidents. But some are caused by improper or delayed maintenance, poor housekeeping, and failing to follow safety protocols.

Routine reasons why slip and falls happen in the workplace include: 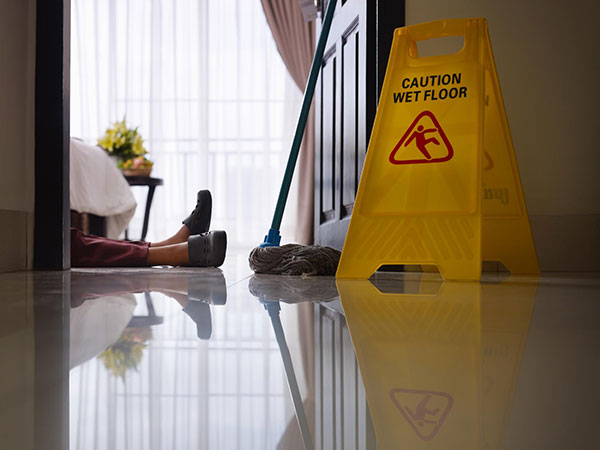 Whatever the cause, the medical bills and other expenses resulting from your accident should be covered under your employer’s workers’ compensation insurance. In some cases, you might also be able to file a personal injury claim against the third-party responsible for your fall.

Can I get workers’ compensation for a slip and fall?

The only exceptions to this rule are if you fail a drug test, or it can be proven that you had drugs or alcohol in your system at the time of the fall. Other common reasons for a workers’ compensation denial include:

Read more: When Your Claim is Denied

How does liability work in Georgia?

If you have precedent to file a third-party lawsuit against a negligent party, you’ll first have to prove fault in order to be awarded damages. A liability claim in Georgia has four elements that you, the claimant, or your attorney must establish:


Example: Let’s say a delivery person slips and falls while dropping off a package at a store because of cracked flooring. As a result of their fall, they break their leg. In this case, the injured delivery person can argue that the store was negligent because it owes a duty of care to maintain safe premises. It breached this duty when it didn’t repair the cracked flooring in a reasonable time frame. The cause of the person’s injuries is the broken flooring that made them trip and fall. Then, they had to go to the emergency room to get X-rays and a cast. They also missed a month of work. As a result, the store is liable for the delivery driver’s non-economic damages. The delivery person is able to obtain workers’ compensation benefits to cover medical expenses and lost wages since they were hurt while on-the-job, and sue the store for personal injury damages like pain and suffering.

Can I sue in court over a slip and fall at work?

Typically, no. In Georgia, workers’ compensation is a no-fault system designed to take the place of the courts in adjudicating work injuries, meaning you forfeit your right to sue your employer if you agree to workers’ comp benefits. However, there are some exceptions.

One exception is if a third-party, who isn’t a co-worker, manager, or otherwise engaged in working on behalf of your employer, caused your injuries. In that case, you can pursue a negligence claim against them for your medical costs, lost wages and non-economic damages — in addition to collecting workers’ compensation.

Additionally, you may be able to sue a co-worker if they were acting outside of the scope of their employment, and their actions caused your injury.

Example: In 2012, the Georgia Supreme Court ruled in the landmark case of Smith v. Ellis that since Ellis wasn’t acting in the course and scope of his employment, he could be sued as a third-party actor by Smith.

Safety Tips: How to Prevent Workplace Slip and Fall Accidents

A little mindfulness and common-sense maintenance can go a long way toward preventing most slip and fall accidents.

Some basic tips include: 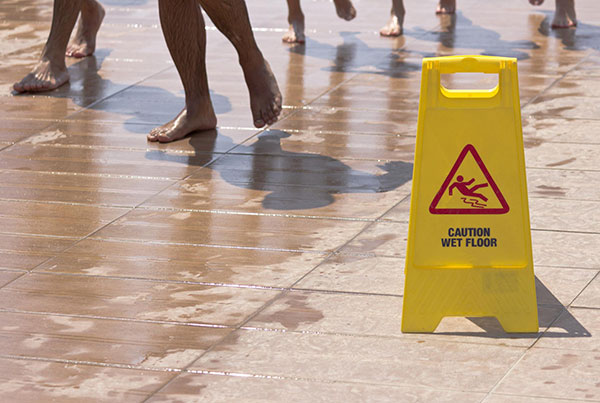 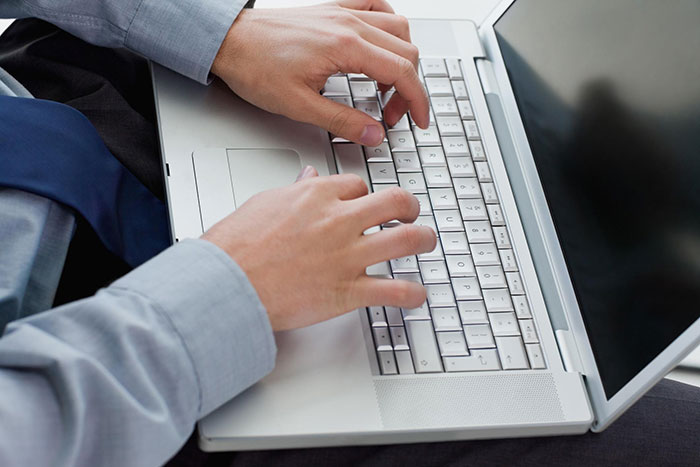 If you’re injured on the job, you should know that you have certain rights, benefits and responsibilities.

What to Do After a Slip and Fall at Work

The first thing you must do is to look after your health and safety. Even if the fall was minor and you don’t think you were seriously hurt, have a doctor examine you anyway to make sure.

Georgia law says that you must report your injury to your employer within 30 days of the date of the injury.

Do this as soon as possible. Georgia law limits the time you have to file your claim to 1 year from the date of injury.

Step 4: Talk to
a lawyer

If you have questions about your rights or have difficulty in filing your claim, consult an attorney.

Read more: Injured On The Job? What To Do Next

Our record of winning slip & fall accident cases in Georgia speaks for itself:

$275,000+ $217,920 MSAMan was injured lifting 50-pound barrels when his hands slipped and he fell. This caused extreme pain in his lower back and required two surgeries.Back Injury
$225,00051-yr old restaurant worker slipped and fell striking his head on the ground while taking the trash out to a dumpster.Head Injury
$140,000Client slipped and fell, landing on his right shoulder. The same day, he went to his truck to pick up materials and fell backward off the truck, landing on his head and back. Materials also fell on top of him.Numerous Injuries

Slip and fall injuries are common at work. Should you have an accident at work and become injured, you have the right to be compensated for your medical bills and lost wages through Georgia’s workers’ compensation system. Seek the advice of a qualified attorney should you have any questions about how to proceed with your claim.

Whether you’re a construction worker, nurse, janitor, truck driver or any other type of worker in Georgia, it’s important to understand that you have rights when it comes to compensation for your medical expenses, lost wages, and pain and suffering under state law.

Our Atlanta attorneys are national leaders in workers’ compensation litigation with over 75 years of experience. Insurance companies have skilled attorneys representing them, and so should you.

Best of all, you don’t have to pay us a penny unless we win your case, so there’s no cost to learning about your rights.

Contact us today to Schedule Your Free Consultation and find out if you have a case.