Georgia Workers’ Compensation Death Benefits: Everything You Need to Know

According to the Bureau of Labor Statistics Census of Fatal Occupational Injuries (CFOI), in 2018, a total of 5,250 workers died from work-related injuries. Since 2009, preventable work-related deaths have increased by 20%, while the number of total workers only increased 10%. One U.S. worker died every 2 hours from a work-related injury. Once compensability of a death claim is established, the next issue is to determine whether the deceased worker had any dependents.

The Georgia Workers’ Compensation Act (the “Act”) ensures that an employee’s dependents are entitled to workers’ compensation benefits when an employee dies as the result of a compensable work-related injury. While determining dependency appears to be a relatively simple matter, in reality, it is perhaps the most complex issue to address when handling a death claim.

Human relationships are, by nature, complex. While the Act is fairly specific, it simply cannot address every possible relationship that could potentially result in dependency. Further complicating matters is a shortage of case law dealing with dependency issues. Because of the high stakes involved, the parties rarely risk the uncertainty of a trial and generally settle these claims.

Am I eligible for workers’ compensation death benefits?

Before commencing settlement negotiations in a death claim, it is necessary to identify all the potential dependents of the decedent. Perhaps the best approach is to ask yourself the following questions:

The governing statute (O.C.G.A. §34-9-13) defines who is presumed to be next of kin, the apportionment of payments among partial and total dependents, and termination of dependency. For example, pursuant to O.C.G.A. §34-9-13(b):

The following persons shall be conclusively presumed to be the next of kin wholly dependent for support upon the deceased employee:

(1) A wife or husband, except that if the wife and husband were living separately for a period of 90 days immediately prior to the accident which resulted in the death of the deceased employee the presumption of total dependence shall be rebuttable; and

(A) The child is under 18 or enrolled full-time in high school;

(B) The child is over 18, and is physically or mentally incapable of earning a livelihood; or

(C) The child is under the age of 22 and is a full-time student or the equivalent in good standing enrolled in a postsecondary institution of higher learning.

According to the Act, a “child” includes dependent stepchildren, legally adopted children, posthumous children, and acknowledged children born out of wedlock. However, it does not include married children, even those who are under 18 years of age. The Act defines “parents” to include stepparents and parents by adoption. Thus, the parent/child relationship is not limited by biology.

It’s important to note that the Georgia Court of Appeals has held that the 1-year death claim statute of limitations applies only to primary beneficiaries and not to secondary beneficiaries who are only contingently entitled to dependency benefits.

Georgia case law defines a dependent as someone who looks to another person for financial support or depends on another person for the ordinary necessities of life to which that person has become accustomed. The dependent must have relied upon the decedent to maintain his or her “standard of living” in order to be considered a dependent.

A secondary beneficiary who is able to prove that he or she was totally dependent upon the decedent at the time if the employee’s accident will remain potentially eligible for lifetime weekly dependency benefits.

Keep in mind, the death of such a dependent will not diminish the amount of the weekly dependency benefits to which any remaining total dependents may be entitled.

It’s also important to note that if the decedent contributed their entire wages to the partially dependent claimant, then such a dependent may be entitled to weekly temporary total disability (TTD) benefits based upon the entire amount of the decedent’s pre-injury average weekly wage (AWW). 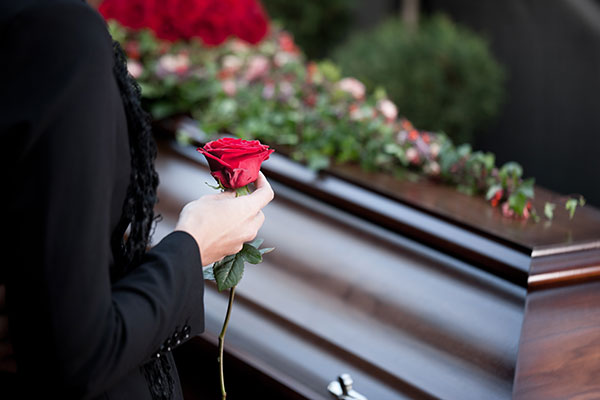 It’s vital that you understand your state’s unique rules and what benefits your family is entitled to receive.

Complete guide to workers’ comp death benefits in the U.S.

How much can I receive in workers’ compensation death benefits, and for how long?

This is perhaps one of the most complex areas of the workers’ compensation law. Therefore, we will address the most straightforward scenario first:
the sole surviving spouse.

When there is a dependent spouse, but no dependent children for more than 1 year after the employee’s death, the sole surviving spouse is entitled to receive the full benefit up to the statutory cap of $270,000 per year. However, dependency of such a spouse will terminate with remarriage or cohabitation in a meretricious relationship.

If income benefits were paid to the injured employee before his or her death, then any such benefits “shall be subtracted from the maximum 400 week period of dependency of a spouse as detailed in O.C.G.A. § 34-9-13.”

If there is a dependent spouse and dependent children at the time of the decedent’s death, the statutory cap of $270,000 is no longer applicable. Here, dependency of the spouse will terminate at age 65 or after payment of 400 weeks of benefits, whichever provides the greater benefit.

The full amount is paid to the spouse for the benefit of the surviving spouse and the children. However, Georgia’s State Board of Workers’ Compensation has the authority, in certain cases, to apportion benefits as it sees fit.

The dependency of a child, except a child who is physically or mentally incapable of earning a livelihood, will terminate when that child reaches the age of 18, unless he or she is enrolled full-time in high school or is under the age of 22 and is a full-time student (or the equivalent) in good standing enrolled in a postsecondary institution of higher learning.

Thus, there is the potential for a totally dependent secondary beneficiary to be entitled to lifetime weekly benefits. However, upon death of the beneficiary, the right to weekly compensation dies and the estate is not entitled to recover any additional benefits following the death.

Individuals who were partially dependent upon the decedent at the time of the on-the-job accident are entitled to recover partial dependency benefits to age 65 or after the payment of 400 weeks, whichever provides the greater benefit.

Georgia law (O.C.G.A. §34-9-265(f)) provides that if no dependents or dependents qualifying to receive weekly benefits are identified, then the employer or insurer is required to pay to the State Board half of the benefits which would have been payable to such dependents or a sum of $10,000, whichever is less.

If, after such payment has been made, it is determined that a dependent or dependents do qualify to receive benefits, the employer/insurer will be entitled to reimbursement by refund for moneys collected in error.

When and why do I need to hire a workers’ compensation attorney near me?

Identifying and addressing dependency issues is the first priority in handling a workers’ compensation death claim. To that end, the first step is to determine the deceased employee’s marital status at the time of his or her work-related death, and whether they had any children as defined by the Act. The decedent’s surviving spouse and children are primary beneficiaries and they are conclusively presumed entitled to dependency benefits.

If you lost a loved one and have any questions about a potential workers’ compensation death claim, we invite you to consult Gerber & Holder Workers’ Compensation Attorneys. Our Atlanta work injury lawyers are highly experienced, deeply knowledgeable and immensely capable in complex work accident cases such as in the case of a job-related fatality.

O.C.G.A. § 34-9-13. Definitions; persons presumed next of kin; apportionment of payments among partial and total dependents; termination of dependency

(a) As used in this Code section, the term:

(1) “Child” includes dependent stepchildren, legally adopted children, posthumous children, and acknowledged children born out of wedlock but does not include married children; and

(b) The following persons shall be conclusively presumed to be the next of kin wholly dependent for support upon the deceased employee:

(1) A wife or husband, except that if the wife and husband were living separately for a period of 90 days immediately prior to the accident which resulted in the death of the deceased employee the presumption of total dependence shall be rebuttable; and

(A) The child is under 18 or enrolled full time in high school;

(B) The child is over 18 and is physically or mentally incapable of earning a livelihood; or

(C) The child is under the age of 22 and is a full-time student or the equivalent in good standing enrolled in a postsecondary institution of higher learning.

(d) In all other cases, questions of dependency, in whole or in part, shall be determined in accordance with the facts at the time of the accident, but no allowance shall be made for any payment made in lieu of board and lodging or services, and no compensation shall be allowed unless the dependency existed for a period of three months or more prior to the accident. In such other cases, if there is more than one person wholly dependent, the death benefit shall be divided among them, and persons partially dependent, if any, shall receive no part thereof; if there is no one wholly dependent and more than one person partially dependent, the death benefit shall be divided among them according to the relative extent of their dependency.

O.C.G.A. § 34-9-265. Compensation for death resulting from injury and other causes; penalty for death from injury proximately caused by intentional act of employer; payment of death benefits where no dependents found

(b) If death results instantly from an accident arising out of and in the course of employment or if during the period of disability caused by an accident death results proximately therefrom, the compensation under this chapter shall be as follows:

(1) The employer shall, in addition to any other compensation, pay the reasonable expenses of the employee’s burial not to exceed $7,500.00. If the employee leaves no dependents, this shall be the only compensation;

(2) The employer shall pay the dependents of the deceased employee, which dependents are wholly dependent on his or her earnings for support at the time of the injury, a weekly compensation equal to the compensation which is provided for in Code Section 34-9-261 for total incapacity;

(4) When weekly payments have been made to an injured employee before his or her death, compensation to dependents shall begin on the date of the last of such payments; but the number of weekly payments made to the injured employee under Code Section 34-9-261, 34-9-262, or 34-9-263 shall be subtracted from the maximum 400 week period of dependency of a spouse provided by Code Section 34-9-13; and in no case shall payments be made to dependents except during dependency.

(c) The compensation provided for in this Code section shall be payable only to dependents and only during dependency.

(d) The total compensation payable under this Code section to a surviving spouse as a sole dependent at the time of death and where there is no other dependent for one year or less after the death of the employee shall in no case exceed $150,000.00.

(e) If it shall be determined that the death of an employee was the direct result of an injury proximately caused by the intentional act of the employer with specific intent to cause such injury, then there shall be added to the weekly income benefits paid to the dependents, if any, of the deceased employee a penalty of 20 percent; provided, however, such penalty in no case shall exceed $20,000.00. For the purpose of this subsection, an employer shall be deemed to have intended an injury only if the employer had actual knowledge that the intended act was certain to cause such injury and knowingly disregarded this certainty of injury. Nothing in this subsection shall limit the effect of Code Section 34-9-11.